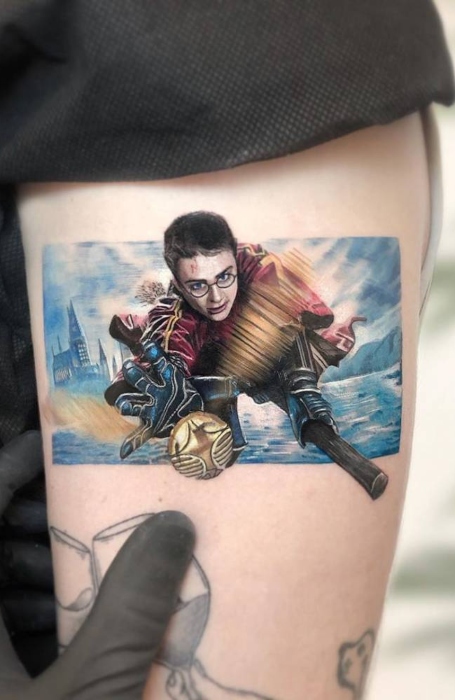 Nearly three decades after the publication of the first Harry Potter novel, the franchise of films that followed it are still immensely popular and timely. Numerous fans have been inspired to exhibit their originality and distinctiveness by the careful consideration and inventiveness that went into creating Harry Potter. should respect each other’s differences. Additionally, body art allows you to express yourself and your identity to the world. Numerous pictures, symbols, intriguing spells, and inspirational sayings can be made into the ideal tattoo. When it comes to Harry Potter tattoos, there is something for everyone, whether you’re looking for a piece to inspire you, support you through a trying time, or celebrate a partnership with a sweet matching design. 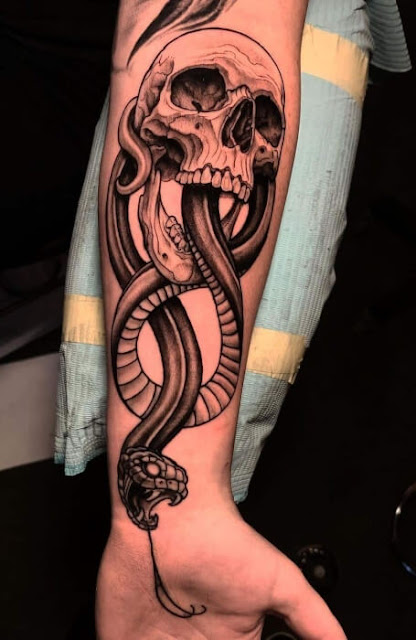 The term “Death Eaters” is used to describe Lord Voldemort’s adherents. This tattoo might be a sign of devotion, trust, and dedication to the group of people who are committed to the Dark Lord—often Slytherin wizards and witches. As the Death Eaters have dark marks that represent their dedication to Voldemort and cannot be removed, it can also represent an unbreakable friendship. Death and rebirth could also be depicted in your tattoo. 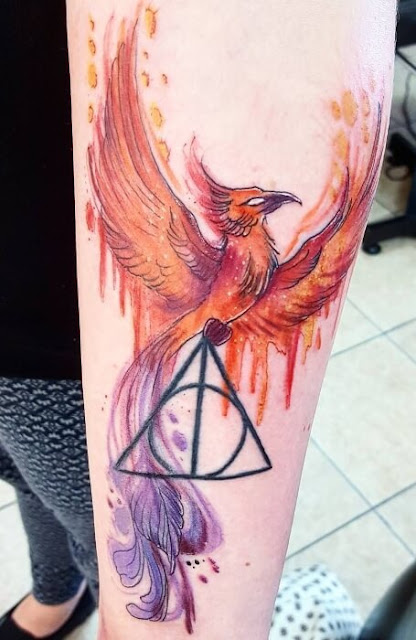 Phoenix tattoos may be quite expressive and are frequently inked to symbolize success and personal development. It also represents new beginnings and rebirth. Fawkes, a phoenix, was originally introduced to Harry Potter by Professor Dumbledore, who was crucial in assisting Harry in learning critical truths about life and death. Fawkes also assisted Harry in taking down the Basilisk, and your tattoo might stand for victory. 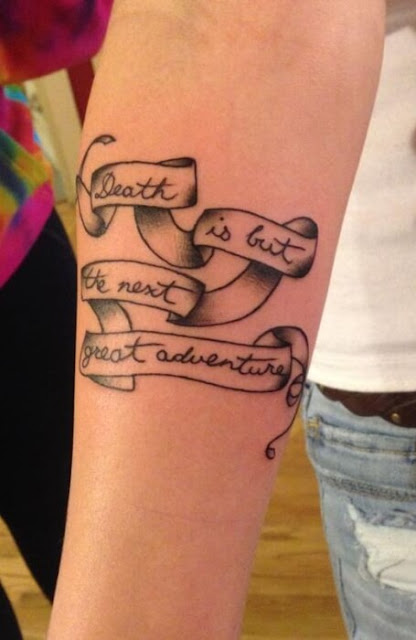 Choosing the appropriate quote for your tattoo can make a strong statement about who you are as a person. There are numerous Harry Potter quotes available that you can use as motivation and inspiration. Your quote might contain a line about love and protection, or it might inspire you to be better and enjoy life to the fullest. It might also help you see the light in the midst of darkness. Find the phrases that most affect you. 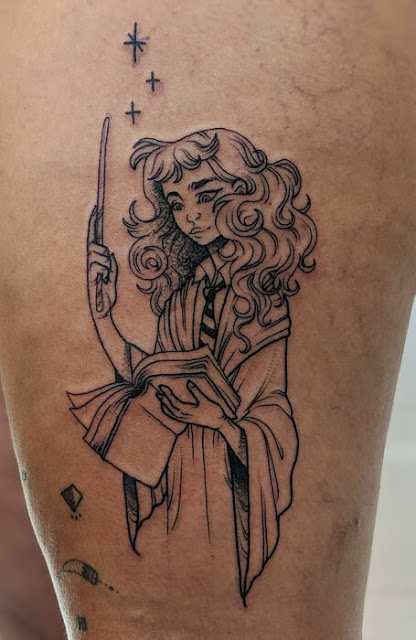 One of the most popular book and movie franchises in the world is Harry Potter. Harry Potter, Ron Weasley, and Hermione Granger are the series’ primary characters. The fandom adores and respects the actors and actresses who played these characters, who were propelled into popularity as a result of their performances. This can be a great choice for your next star tattoo design if you have a favorite. Or it might actually be a star, signifying direction and enchantment.

A devoted and enthusiastic fanbase exists for Harry Potter. The first book was published nearly thirty years ago, but the wizarding world is still important now just as it was then. The attention to detail and inventiveness that went into crafting the book series will inspire you to ink strong spells or iconic symbols like Harry Potter’s glasses on your body. 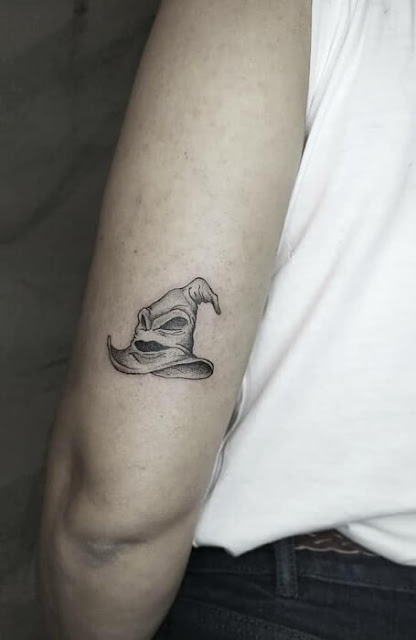 Small tattoos are attractive because they may be placed virtually anywhere on the body, such as on the finger or behind the ear. Your design is also more covert and unobtrusive because to the size. There are lots of fantastic Harry Potter-inspired tattoo designs available, including images of the Sorting Hat, the Deathly Hallows Sign, and the Golden Snitch. Your decision will be based on the significance you wish to give your design. 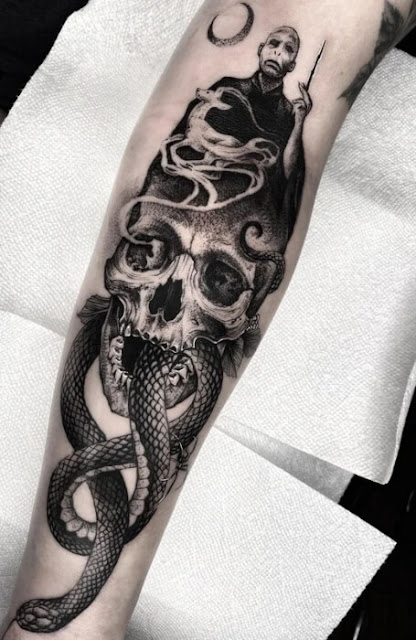 The Dark Mark served as a representation of devotion to Lord Voldemort. As a sign of their loyalty to Voldemort, his supporters had the emblem tattooed on the inside of their left forearms. Voldemort could also call upon them if necessary. The symbolism you attach to a design like this will determine why you would pick it. For some people, getting tattooed can serve as a symbol of the struggle between good and evil or a declaration that they have triumphed over adversity. 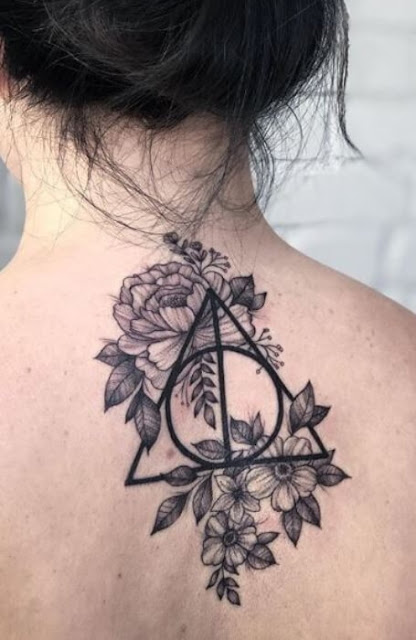 One of the most significant concepts in the Harry Potter series is the Deathly Hallows, which is symbolized by a triangular mark with a circle and line inside it. They stand for three potent, by death-made items. A witch or wizard is said to be capable of victory or conquest if they are in control of all three items at once. 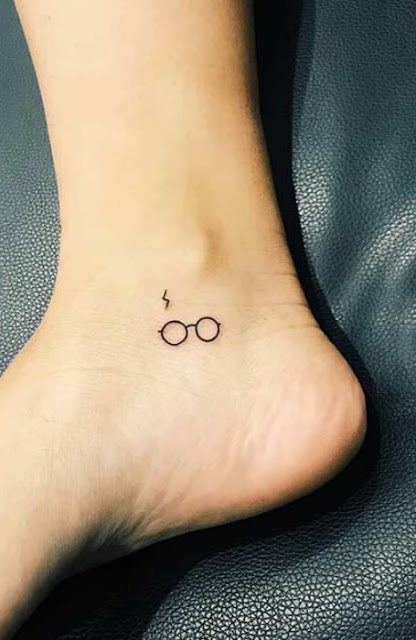 A lightning bolt is a great option for anyone seeking for a straightforward but significant tattoo for their Harry Potter-inspired design. Due to his mother’s death while attempting to defend him from Voldemort, Harry’s scar, which resembles a miniature lightning bolt, serves as a reminder of sacrifice and unwavering love. Due to Lily’s sacrifice, which served as a barrier against Voldemort, it might also be interpreted as a sign of protection. 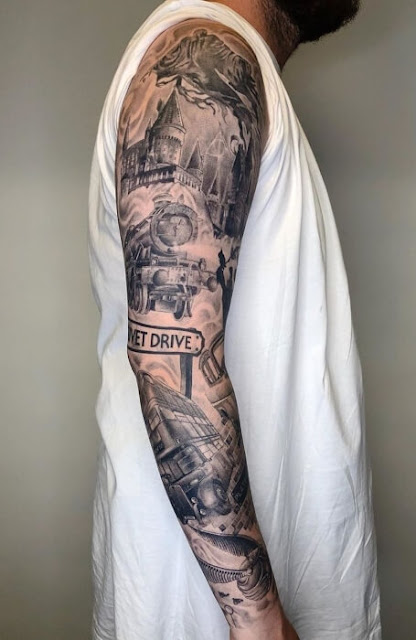 For those who wish to integrate multiple images and have their body art tell a story, sleeve tattoos are a great option. Because it enables the images to mix easily, sleeves function best when they are made in the same style and topic. There are many designs to incorporate into your sleeve tattoo from the Harry Potter series, which is a terrific source of inspiration. 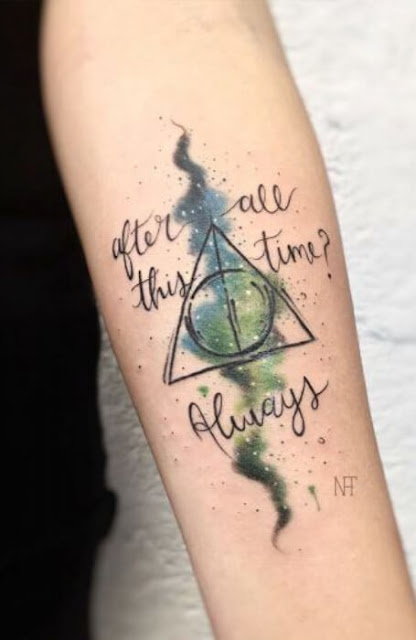 What better way than with a tattoo to express your passion and affection for the Harry Potter series? For the fandom to get tattooed with as a symbol of their devotion and steadfastness, the word “Always” has grown in popularity. It can be made in a variety of ways, such as by turning the letter A into the Deathly Hallows sign or by inserting a spell, a wand, or other symbols.

12. Tattoo of a Harry Potter Wand 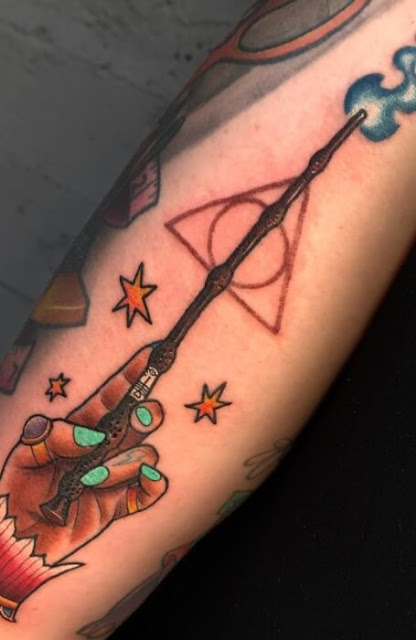 A Harry Potter wand tattoo can be simple or intricately crafted, large or little. Additionally full of symbolism, it is linked to magic, mystery, development, strength, and defense. Depending on the symbolism you choose to attach to the wand, you can customize it. For instance, a phoenix feather is found on Harry Potter’s wand, and the phoenix represents immortality and rebirth. 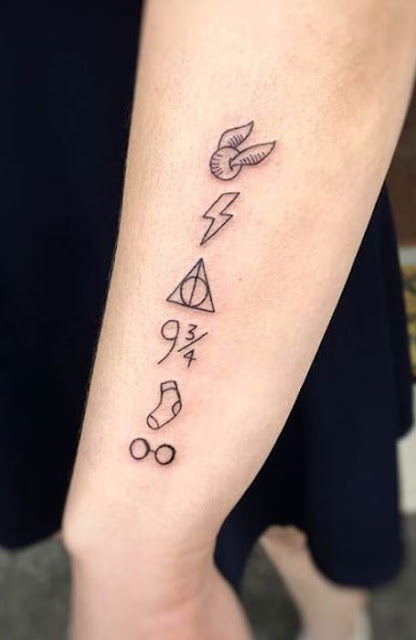 Everybody who has a meaningful tattoo is different. They can be anything and represent your sentiments and ideas, provide you comfort, or give you a sense of security and protection. Harry Potter devotees could be drawn to particular signs, spells, or even pictures of their preferred character. If you want flexibility with placement, designing them with a little tattoo is a great option. 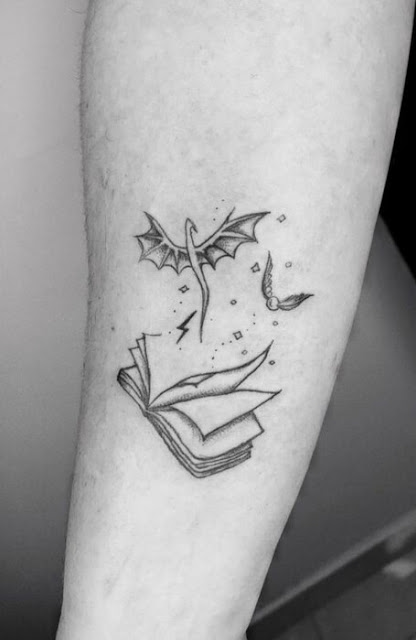 Simple tattoos are made with black ink with little shading or other detail, and they emphasize the essential elements of the design. Those who want a minimalistic appearance will like this style. Numerous Harry Potter symbols are easy to understand or may be made simple, such as his recognizable glasses, a wand, the Deathly Hallows insignia, the Golden Snitch, winged keys, and many more.

15. Tattoo of a Harry Potter scar 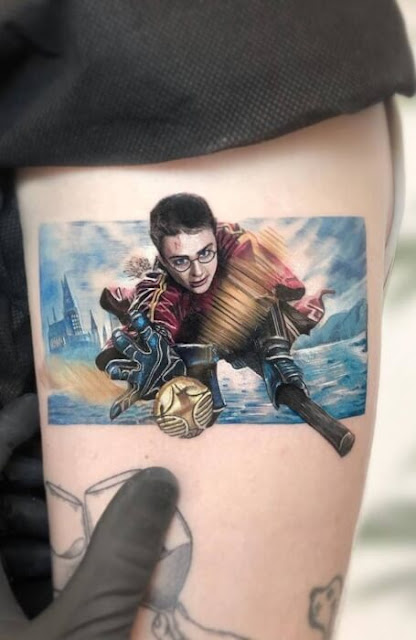 Harry Potter’s scar, a tiny lightning bolt left behind when his mother gave her life to shield him from Voldemort, is one of his distinguishing features. At that time, he was a young child. Therefore, this scar is a potent emblem of love and protection. It might also be inked to symbolize the victory of good over evil or the fact that you are strong and capable of overcoming difficulties. 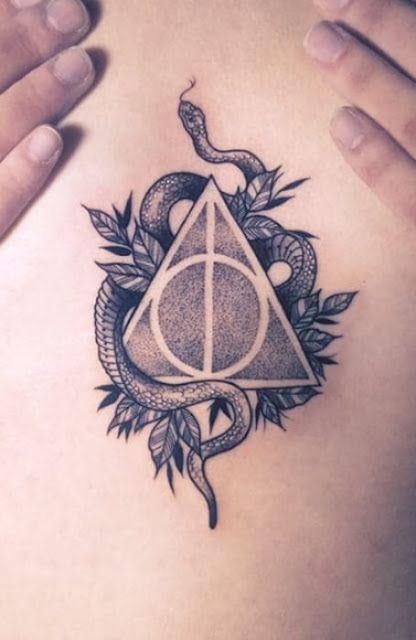 Because of its elaborate symbolism, which frequently refers to the cycle of life and transformation, snake tattoos are very common. Serpents may stand for evil, death, or loyalty to Lord Voldemort in the minds of Harry Potter devotees. The snake is a representation of Parselmouths and the Slytherin house insignia (the name given to those who could speak Parseltongue, an uncommon skill where witches and wizards can communicate with serpents). 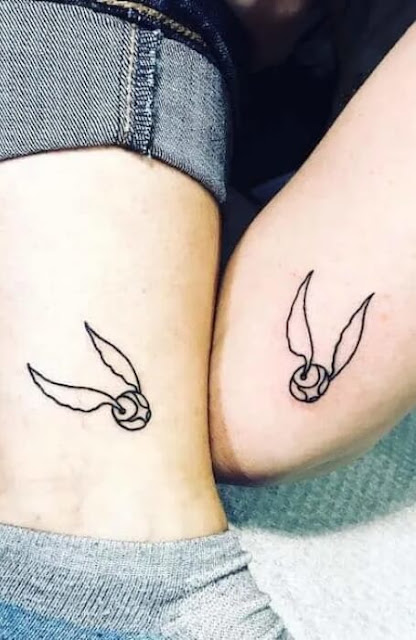 A sweet approach to honor your connection with someone you love is to get matching tattoos. The process of selecting the ideal design will be a further opportunity for bonding with this person, who could be a sibling, closest friend, or romantic partner. You might be drawn to symbols like the Deathly Hallows, wands, lightning bolts, spells, and phoenixes if you love Harry Potter and the wizarding world. 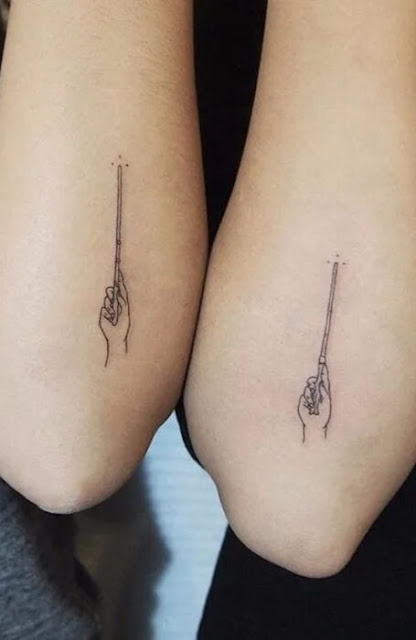 Black ink is used to produce minimalist tattoo designs, which have clear lines, negative space, little detail, and no shading. They can be inked big or tiny, but they are streamlined and concentrate on the fundamentals. This tattooing style is appealing because it can appear delicate and be done on a smaller size, providing you more placement options. 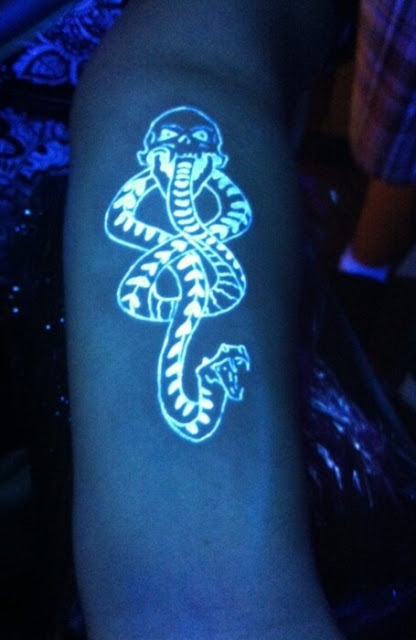 Unusual and definitely cool, a black-light tattoo is. Since UV tattoos are only visible under UV light, they are the perfect choice for anyone who wishes to add a touch of magic and mystery to their design—a theme that goes well with artwork that is inspired by the works of Harry Potter. This is another covert choice for body art. The drawback is that there are no regulations on these tattoos, and the ink’s chemicals may be harmful to your health. 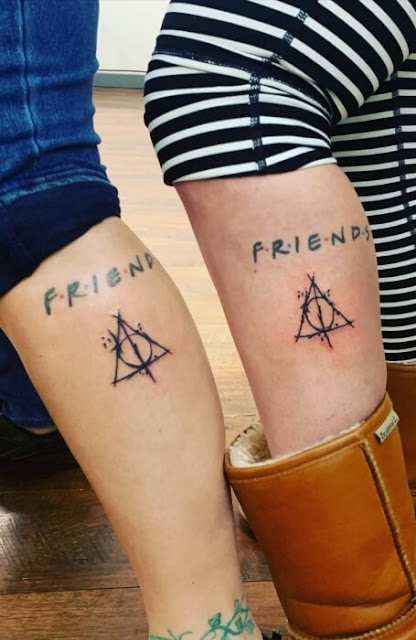 Tattoos that match your friend’s are a wonderful way to acknowledge your friendship. To honor a buddy, a sibling, or a love partner is one option; the foundation of all of these connections is friendship. As long as they hold significance for you, matching tattoos can be of any subject. Harry Potter serves as a fantastic idea for everything from strong motifs to straightforward tattoos like the word “always.” 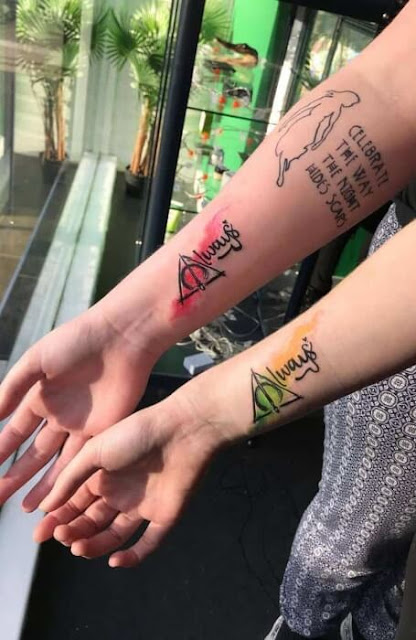 Someone who is always there for you and ready to provide you unwavering love and support is your sibling. A sibling tattoo would be a lovely way to celebrate the remarkable and one-of-a-kind bond that you share with your siblings. Numerous siblings, most notably Fred and George Weasley, are featured in the Harry Potter series, but you might also select other symbols that speak to you to use as an inspiration for your drawings. 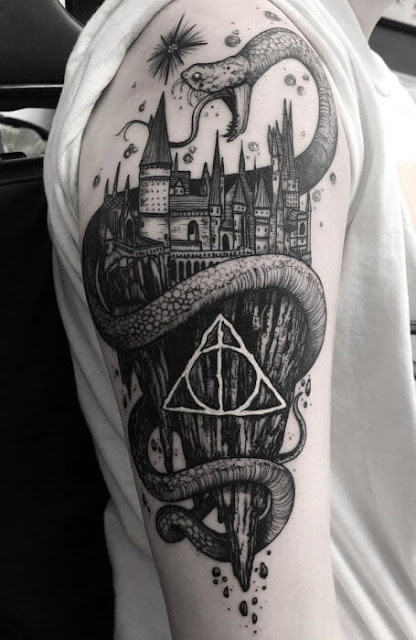 Because of the deep meaning attached to them, symbols and motifs from the Harry Potter series are frequently tattooed, but you can also design something unique and unique to you. Individual tattoos are made specifically for the wearer and hold special meaning. You can create a piece of art inspired by Harry Potter on your own, mix various photos to deepen the message, or collaborate with your tattoo artist to give your design a unique appearance.

23. Tattoos of a Harry Potter couple 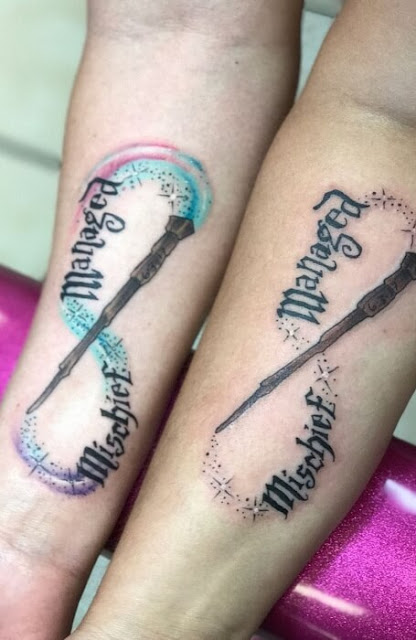 A nice way to demonstrate your commitment to your love is by getting a couple tattoo. This is a great option for your tattoo if you and your lover have become close because of Harry Potter. You can select coordinating patterns, complementary symbols, or even quotations. As an alternative to wearing a wedding band, some people decide to get a tattoo over their ring finger.